The imprint of the British Empire is to be seen in many places in South Africa.

That it saw fit to wage war on two far-away Boer Republics in the closing stages of the 19th century is a decision that set the stage for all that followed in South Africa as it is today.

During that war the imperial war machine was given a shock by the tactics, tenacity and resolve of the Boer soldiers.

Indeed, despite overwhelming numerical superiority the only method which succeeded in sapping the Boer soldier's will to sustain the fight was the merciless genocide perpetrated against the civilian Boer and African populations at the instigation of General Kitchener.

All women and children found on farms  throughout the Republics were rounded-up, with their servants and - after the farms were blown up,the crops burnt, wells poisoned and fields salted - marched off to one of 100 or more concentration camps set up for the purpose.

The camps were initially an ad-hoc response to the tactical situation. With typical British sportsmanship rivalry being applied by the soldiers and commanders, however, the pressure to top the weekly lists of "bags" led to a sustained and officially encouraged policy of denuding the land of the Boer population.

The lack of thorough pre-planning became evident in the alarming death rate of the people confined in them. Without proper sanitation (if any) dysentry, typhoid and measles spread like wild-fire through the camps. Water was scarce in most, medical supplies non-existent and food bordered on a starvation ration with the families of those whose men were deemed to still be fighting getting less still.

Images taken by Emily Hobhouse of inmates were to preview the scenes in the worst of the Nazi extermination camps in Europe some 43 years later. Ironically the secretary of state for war in the British government of the day also previewed the official Nazi line on their camps when he told parliament that the camps were purely "voluntary" and that the interned Boers were "contented and comfortable."

At one such camp, in Irene in Pretoria, severe outbreaks of typhoid and influenza decimated the numbers in the latter stages of 1901.

During my visit to the neatly kept terrain an irrigation system sprang to life and began saturating my legs and the lawns.

I could not but be struck by the irony in having gallons of water splashing upon the memorial stones of those who had so desperately needed water in the period in which they were interned on the very same patch of ground.

Furthermore, the droplets seemed to symbolise the spirit of each of the more than 1200 people that are recorded to have died here - frozen in time on a journey through their lives which they would never complete in the natural order of things. 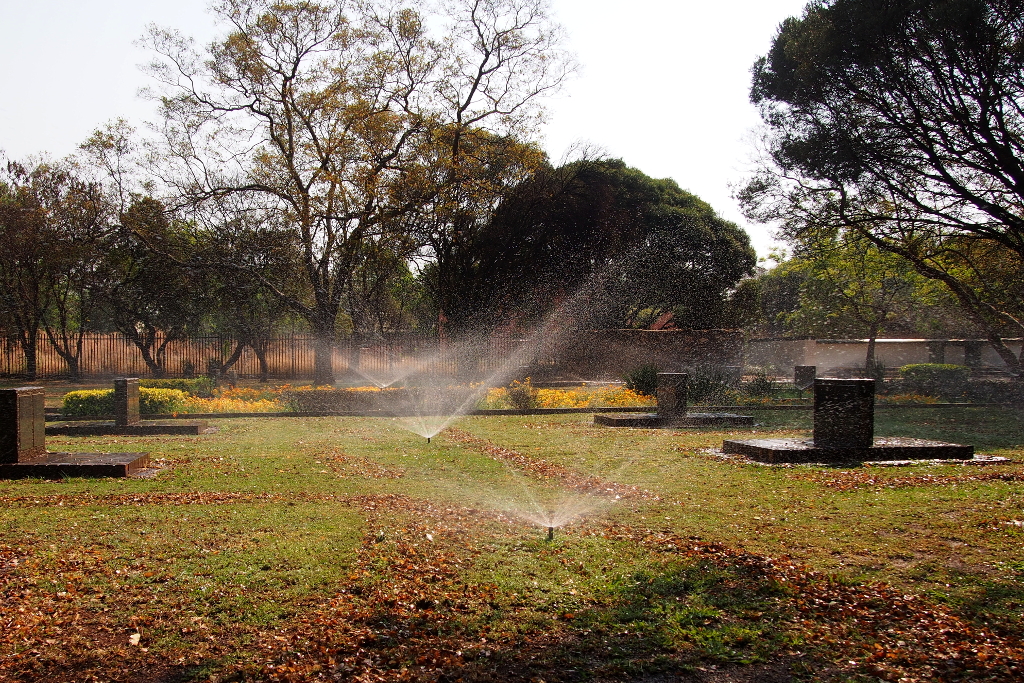 Towards the entrance and memorial display are two rows of memorial headstones which have replaced the painstakingly carved slate headstones originally used to record the dead. These slate stones have literally had to be kept under lock and key to prevent them being vandalized or stolen.

The memorial at front right in the photograph below records the loss of 6 members of a single family at the close of 1901. A mother and all her children passed within just eight weeks. An entire generation of humans was sacrificed on the altar of political expediency in the pursuit of Africa's mineral wealth by those who claimed to have come in order to bring "civilization" to Africa.

I record their names here in memory of the more than 27 000 women and children that died in the network of concentration camps in the period 1900 to 1902. All-in all there can, in my view, never be any justification of this shameful period of empire building. 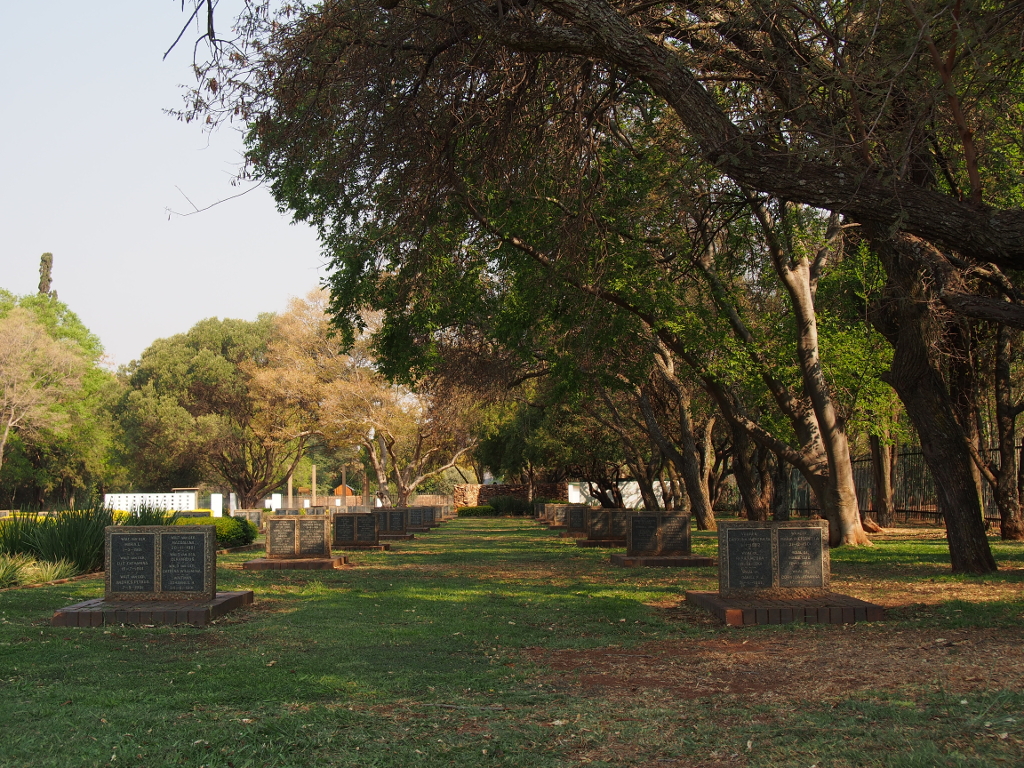 One can fully understand that, in the face of such tragedy, the Boer soldiers were more than champing at the bit to carry the fight to the British for as long as possible. Furthermore, it is also easy to understand how deep the wounds of this policy run within the relatively small population's descendants to this very day.

A fascinating fact which emerged from following up on my memories of the slate headstones which were the original silent sentinels of the dead at the camp was that it was only on these that some of the names of staff of the farms were recorded by the Boer women or children.

The British record keepers only logged the names and identities of the Boer citizens and not the staff. This has made it impossible to count the victims of the genocide as it affected the African populations of the two Republics. The most conservative estimates claim at least 20 000 staff died in the full series of camps.

So much for the much-vaunted British "humanity"...

This photograph was taken barely 200 meters from a new, multi-level shopping mall in KwaZulu-Natal.

The image depicts an early morning scene at a dormitory for workers of a chicken farm.

The scene has its own beauty caused, in part, by the light and the contrast created in the camera's processor. It was this light and the geometric forms that caught my eye as I drove by.

On a deeper level, knowing that the staff sleeping in these rudimetary quarters are probably working to supply the wealthy patrons in the centre within a stone's throw of where they live, adds - for me - a greater meaning to the photograph. 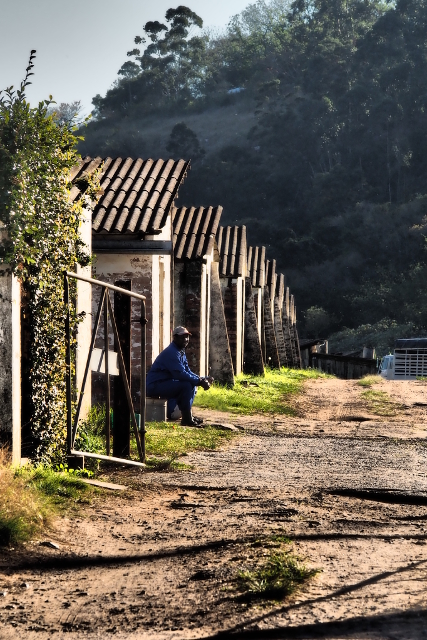 I have witnessed many events in many places.

Africa, and especially South Africa's townships in the 1980s was, however, where I cut my teeth in regard to news and documentary photography.

Sadly, many of my negatives and prints of that era were deemed unpatriotic and were "removed for safekeeping" by gentlemen with crew cut hairstyles and cheap off the peg suits in 1988.

However, nothing much has changed since then anyway. It is tragic that on a continent that is so wealthy and vast, lines on maps that often bear little relation to the realities on the ground, result in so much agression, senseless destruction and misery.

This is demonstrated time and again in regions large and small, from the gang territories so fiercly "protected" in Delft, Mitchell's Plain and other townships of the Western Cape in South Africa, to the border disputes in Central, West and East Africa.

In the middle of it all are the millions of people of the continent that are born there, struggle to survive and then die - sometimes in a few very short years. Most exist and pass without having known much aside from the feeling of being bobbed about on a sea of circumstances over which they have absolutely no control. These currents originate in distant lands and cities, driven by the world commercial system and the views of self-important leaders and politicians these Africans probably do not know exist.

The first two photographs I am sharing with you here sort of sum this all up for me.

In a place where the sky is a clear blue on a lovely sunny African morning, far from the millions having breakfast at Starbucks or McDonalds in London, New York or Tokyo before they go to offices where they will make money on the prospects of companies mining minerals or oil beneath this lady's feet, the soldiers came.

This lady was told she did not have permission to live in that particular spot of the forest. 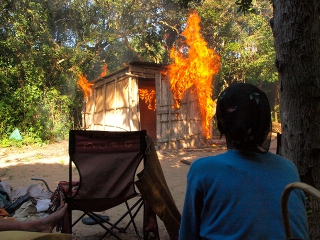 The Day The Soldiers Came. Somewhere in Africa 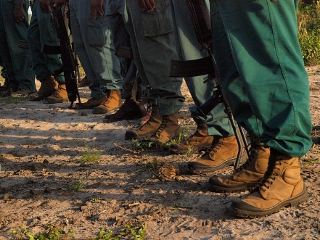 Defenders of the Revolution. Somewhere in Africa.

A BETTER LIFE FOR ALL

This cameo of images reflect the reality of South Africa for most of its citizens 19 years after the euphoric headlines of 1994.

The photograph of a child drinking water was taken during break (recess) at a school built two years previously in a suburb near a major city. It is the only tap in the school yard and most of the 1000 plus pupils spend their entire break in line waiting to get a drink.

The next break may be spent in a line for one of only 4 toilets on the property, none of which are properly functional. 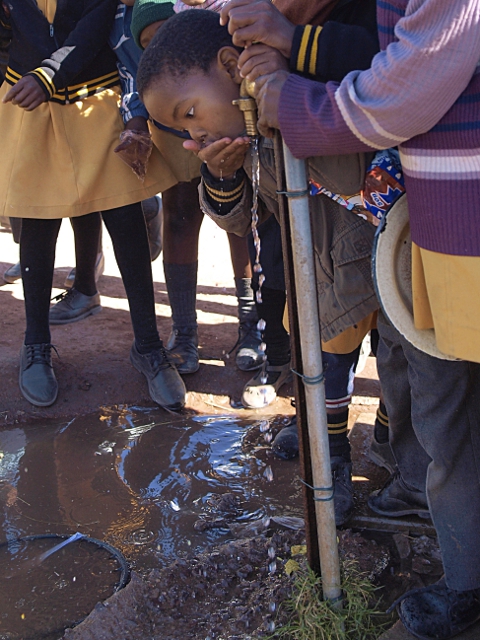 Barely 200km away (120 miles), the current President's private residence has allegedly had "security upgrades" to the premises that are estimated to have cost in excess of 20 million US Dollars. Nobody knows the actual figure or what was done as the report on the use of public money has been declared a state secret.

Less than 20km (12 miles) away from this public works programme, the homes of two normal citizen's share the country air. 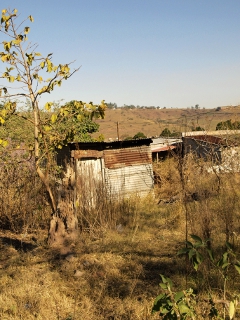 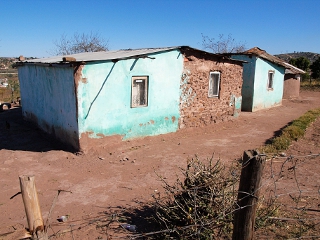 There are, of course, well established and first world standards in the suburbs of the large cities.

The problem is, however, that the infrastructure everywhere is creaking and showing stress. No more so than in the ability of the police service to deal with an ever increasing population without formal, regular income that can do little except envy and dislike the small percentage of the population that frequent restaurants and high-end motor car dealerships.

In certain communities alcohol and other dependencies are increasing problems. The ability of families to break this cycle from generation to generation is limited and when the happy carefree places of childhood become places where you dare not venture because the wrong types of people are hanging out there, the issues facing urbanised citizens make the prospect of escape even dimmer.

This next image was taken in the suburb of Asherville in Durban. It is not set up. The items were there on a Saturday morning when I was at a sports field nearby to cover a cricket game. 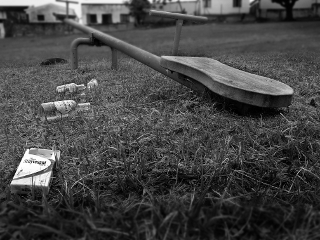 For now, the final image in this cameo of world life, needs little further comment aside from its title. More images may be added as time permits. 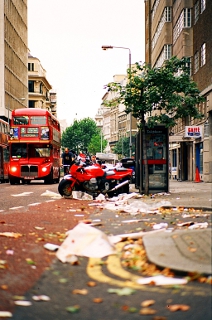 At the heart of Civilization., London Street, SW1, London, England.